Careers in Industry and Academia

I recently spoke at Recursion Pharmaceuticals’ Career Insights Series on career development and trajectory in industry (and how it differs from the same in academia, for those coming from PhDs and postdocs). If you’d like to watch along with the post (or instead of the post), you can view the talk here. (Sorry for the low resolution!) The rest of this post will briefly summarize some of the key points, but I won’t try to reproduce the whole thing!

My goal in this talk was to share some of the career insights that I’ve learned from my journey through industry post-PhD [1], in three parts:

If you haven’t already read Matt Might’s Illustrated Guide to a Ph.D. do that first, and come back. The upshot is that a Ph.D. involves going to the edge of what’s known in a field, pushing on that boundary until it gives in, and then the dent you’ve made is called a Ph.D: 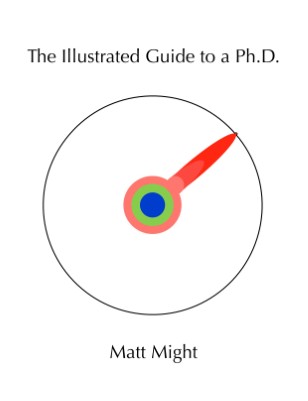 The academic “value system” is reflected in this picture. If we take angle in the diagram to represent “field of study” and radius as “how much do you know”, academia primarily values radius: being ultra-deep in a particular field is much more valuable than being moderately deep in many. (There are some exceptions in interdisciplinary fields.) To some extent, it doesn’t even matter what the thing is that you know very deeply, as long as you’re ultra deep. (This obviously isn’t literally true, but is much more true than it is in industry.)

By contrast, the industrial value system is less about “what do you know”, and much more about “what can you do”. Any for-profit company (and most non-profits) will have certain drivers for their success, and your value to the business depends on how you can drive that bottom line. To be simplistic about it: what’s the business case for your raise, your promotion, or for your job to exist? A company for which I previously worked (Counsyl) had as one of its values “Produce More Than You Consume”, which I think is a pretty useful way of staying focused.

An audience member said he had been told that doing a postdoc was just like doing a “startup of 1”. I emphatically disagree. While a postdoc is often the first semi-independent research position held by an individual, it is still FAR more specialized than the work involved at a small company. At a startup, you don’t just set a research direction, get money, and do research; in the same day that you do those, you may work with corporate lawyers, set up the phones, build IKEA furniture, and still get some work done.

This difference in values implies differences in problem selection. As mentioned earlier, academia has a strong self-reinforcing bias on continuing research work in a given direction; this even manifests in the ways that metrics are discussed. For example, an improved machine learning method that increases accuracy could be seen as a 10x improvement (1% error rate -> 0.1% error rate), or a 0.9% improvement (99% correct -> 99.9% correct), and much incremental machine learning work is justified along grounds like the former. In practice, however, it may be more useful to shift problems completely and take something from 10% to 80% — and if doing that work is methodologically trivial and only takes a week, so much the better; industry cares about your impact on the value drivers of the company, not the novelty of the method per se.

(As an aside: it is useful to distinguish novelty from innovation. I characterize innovation (in industry) as novelty with a purpose or with an impact. It’s not enough to be new - show me why new matters! In many cases novelty alone is something to be isolated to very particular areas, as novel methods are intrinsically untested and poorly-understood; as such pure newness poses risks that have to be evaluated against potential benefits.)

Industrial value as a function of size: generalists vs specialists

Assertion: a company can only use a certain percentage of their workforce as hyper-specialists, so it’s more obvious to see how specialist researchers have positions in large organizations (think Google Research or NIBR). It’s not the case that specialists are useless at small companies, but the number is usually much lower. An innovation-focused startup will likely need at least one or two individuals specialized in the field the company is trying to innovate (or else the rest of the workforce will spend their time trying to work their way up to that boundary of human knowledge that the specialists already know)…but those specialists may not even be employees! They may be scientific advisors, for example. It’s also not tenable for every employee in a startup to be a hyper-specialist because there are a lot of problems to solve at a new company that aren’t the core technical problem; as a personal example, at Freenome, I was not only the CSO responsible for setting our R&D direction, I was also the sysadmin responsible for our compute cluster (because someone’s gotta do it, and I knew how to do it).

As companies grow and derive a better understanding of their precise needs and roadmap, positions tend to become more specialized (instead of a single job posting for “full stack engineer”, there are ten positions named things like “software developer in test for C++20”). Interestingly, as companies grow, the generalists who started early often retain a broader perspective and can demonstrate unique value in retaining that generalism. Such individuals can end up on the management or senior IC (individual contributor) tracks because they have context about the rest of the company and act as nodes to connect different specialized parts of the organization. A consequence of this is that sustained growth in a company (in my opinion, obviously) requires one to learn context outside your own domain and communicate outside your specialty, while also executing within your core expertise.

Two thoughts on growth in industry

Two anti-patterns for growth that I’ve seen in my time both as a hiring manager and working with academically-minded folks:

Intellectually-minded individuals get their intellectual rewards from solving intellectual problems. But past a certain point (in industry), no one cares how fancy your algorithm is or how beautiful your experimental design is; it’s better to get the job done. As I used to say in my recruiting talks at Counsyl: an assay is not a product, and an algorithm is not a company. There’s massive value, as the tech person, in learning the broader context of the industry and business in which you operate and learning how to use your core tech skills to deliver value:

The “shape” of your years of experience

Let’s say you have “five years of experience”. I argue that this is underspecified: within this description you can truly have five consecutive years of experience, you can have the same one year of experience five times, or you can have five different one-years of experience. The middle scenario is one that as a growth-focused individual, you absolutely do not want to find yourself in, where you keep repeating the same one-year’s worth of tasks over and over without growing beyond. The first and third scenarios represent extremes on the specialization-vs-generalization axis, and either can be valuable (though typically a mix will be more useful). In choosing where to specialize or generalize, I offered that 1) especially early on, it is important to develop a set of core skills on which to draw, and if this set is not complete, it can make sense to fill out that set of skills; and 2) picking that set of skills should be done in such a way as to maximize the breadth of your future options. As an example of (2) — instead of focusing on a very particular programming language or field of biology, it makes more sense to develop a set of fundamentals that can be rapidly translated into many future openings.

Related to this is the question of the buzzword-driven resume. Years ago, I gave a talk titled “Genomics is not Big Data”, mostly because I was annoyed at the flood of resumes of people who were only interested in working on Hadoop-related Big Data problems because that was the hot thing in engineering at the time. Today, the same story repeats, but with deep learning on one side of the field, and Kubernetes/distributed/serverless systems on another. Learning durable skills rather than trends is certainly part of my advice, but more subtly, it’s worth looking to see what elements of each trend are worth learning. Communications skills, written as well as verbal, are in my opinion systematically undervalued in technical fields, and are extremely valuable as a career progresses.

Critically, it’s important to take advantage of the environment you find yourself in to drive your learning. For any given skill, is it something that you can uniquely learn well from your colleagues, managers, etc.? Or is it something that can be effectively learned on your own time, at home? Skills to try to learn during your day job should either be those that fit into the first group (where you really get something out of doing it at work) AND that deliver value to those around you, not just yourself.

And finally, if you’re in an environment where you aren’t learning, there’s no shame in leaving to go somewhere else where you can, even if you like your current job and all your coworkers. I did it. It was worthwhile. (There’s also no shame in staying if you have circumstances that make it the best option, but I’m assuming personal growth is the main objective.)

There’s more detail (and audience questions) in the talk video, so give that a listen if you found this interesting. Hit me with questions on Twitter if this resonated!

[1] As background: after completing a PhD in computer science, I’ve been at three startups ranging from 12 to about 550 people. During my job search in 2018-2019, I had on the table serious options ranging from starting a company, to joining academia, to joining Very Large Companies;