Enough fooling around, show me the board!

TL;DR - Hardware selection (microcontroller, power delivery, signaling) and board layouts for the PeloMon.

Fourth in a series. See the project GitHub, to be updated through the series.

The PeloMon out of its case. Note debug headers for 3V3, GND, Peloton signaling on rows 10-11, and debug signals on A0-A5.

Let’s walk through the parts on the board from top to bottom.

The most important decision was to choose the controller at the heart of the project. ptx2’s post on unbricking a Flywheel bike inspired this work, so an obvious place to start would have been the same Raspberry Pi Zero W that was used in that project — easy to follow in the footsteps and use the same software stack! However, I went in a different direction for a few reasons:

The board also had to support the wireless interfaces I cared about! For a speed/cadence sensor to pair with a Garmin watch, you have a choice of Bluetooth LE (BLE) or ANT+. It’s a lot easier to find BLE hardware than ANT+ hardware, so that’s that. This would be powered off the power supply for the bike itself, so low power was not a consideration.

Based on the BLE constraint, the desire for a constrained environment, a need to implement two serial interfaces, and my own microcontroller experience, I focused my search on Arduino-compatible devices (I knew it was easy to implement multiple software serial interfaces here). There are a variety of Bluetooth shields available for Arduino, but most do not support Bluetooth LE, which is a different spec from just “Bluetooth”. Several all-in-one boards do support BLE: the Arduino Nano 33 BLE and the Adafruit Feather (M0/32u4/nRF52) Bluefruit LE boards (among others, I’m sure). All of these boards have a chip from Nordic Semiconductor on them handling Bluetooth; some of them (the M0 and 32u4) have separate microcontrollers running your code, whereas the others use the Nordic chip also as the main microcontroller.

I chose the ATMega 32u4-based Adafruit Feather 32u4 Bluefruit LE mostly because I knew that I wanted to maintain the resistance calibration table- in non-volatile memory, and I knew that could be done reasonably with the EEPROM support on the ATMega whereas I’m not familiar with how well that’s supported on the Cortex-M0 or nRF52832 boards. (There are libraries that use the onboard flash on the Cortex boards to emulate EEPROM, but the underlying memory has serious write endurance limitations that I don’t really want to have to think about; the ATMega EEPROM has endurance at least 10x better, perhaps more.) This also meant I was working on the most limited platform of all of them - with only 32ish kB of code space.

As described in the first post in the series, the Peloton’s signaling is inverted RS-232 at a voltage of about 5.5-6V. The ATMega chosen above is a 3.3V part which has dire warnings about applying input voltages greater than that to any pins — and would probably be even less happy with voltages below ground. Full-on UART chips are expensive, so I used a cheap 74AHCT14N inverter/level shifter between the wire and the micro. Strictly speaking, it too is being driven outside its specifications, but it seems to work fine and hasn’t let out any magic smoke yet.

We also need to power this board. The Feather is designed to be powered from USB or from a lipoly battery, but there’s no USB port convenient on the back of the Peloton and there’s no reason to add a battery to the BOM. The tablet has a 12V supply that we can split off, but then this needs to be dropped to the right voltage for the hardware. The power management documentation for the Feather says that the board is not designed to take an external power supply, which is probably its biggest disadvantage in this application. Nevertheless, it is possible to power it from an external source by applying power directly to the appropriate pins.

I first tried to do this with a 3.3V buck converter…and it didn’t quite work. Looking at the power delivery schematics for the board, it’s unclear why, but swapping it out for a 5V buck converter with its output wired to the USB power pin made it all work fine. This has the possibility of back-powering the USB port if connected to external power and USB at the same time…so don’t do that.

Power comes into the board using one of Adafruit’s “breadboard-friendly” 2.1mm DC barrel jacks. This thing may be breadboard-friendly, but in my opinion it’s breadboard-useless: the pins’ offsets are just slightly off from where they’d need to be to go straight into a breadboard (they need to be bent slightly), and they’re not long enough to be properly held on, at least in the breadboard I used. It would kinda stick, but not very well. It was fine when soldered in, though.

The TRRS jack and breakout was just a standard TRRS breakout. Nothing special and they come ten to a pack for cheap. Ditto the precut breadboard wires; a couple bucks to have convenient lengths is well worth it.

While prototyping the PeloMon I built it on a standard half-size breadboard. For the final thing, I moved it to the Adafruit mint tin-sized PermaProto board, which has the same connection pattern as a breadboard, with a few extra rows of isolated spaces, and the right size to fit into an Altoids tin. I probably could have gotten away with something cheaper, but this was thrown in for free with a sufficiently-sized order, so why not? It’s nice.

There’s nothing tricky about laying out this board — no high voltage isolation, no sensitive timing, etc. — other than a fun puzzle figuring out where to put components to optimize wiring. A couple months ago, we had a freak windstorm in Salt Lake City that knocked out our power. Playing with breadboard layouts in pencil and paper while waiting for components to arrive was relaxing: 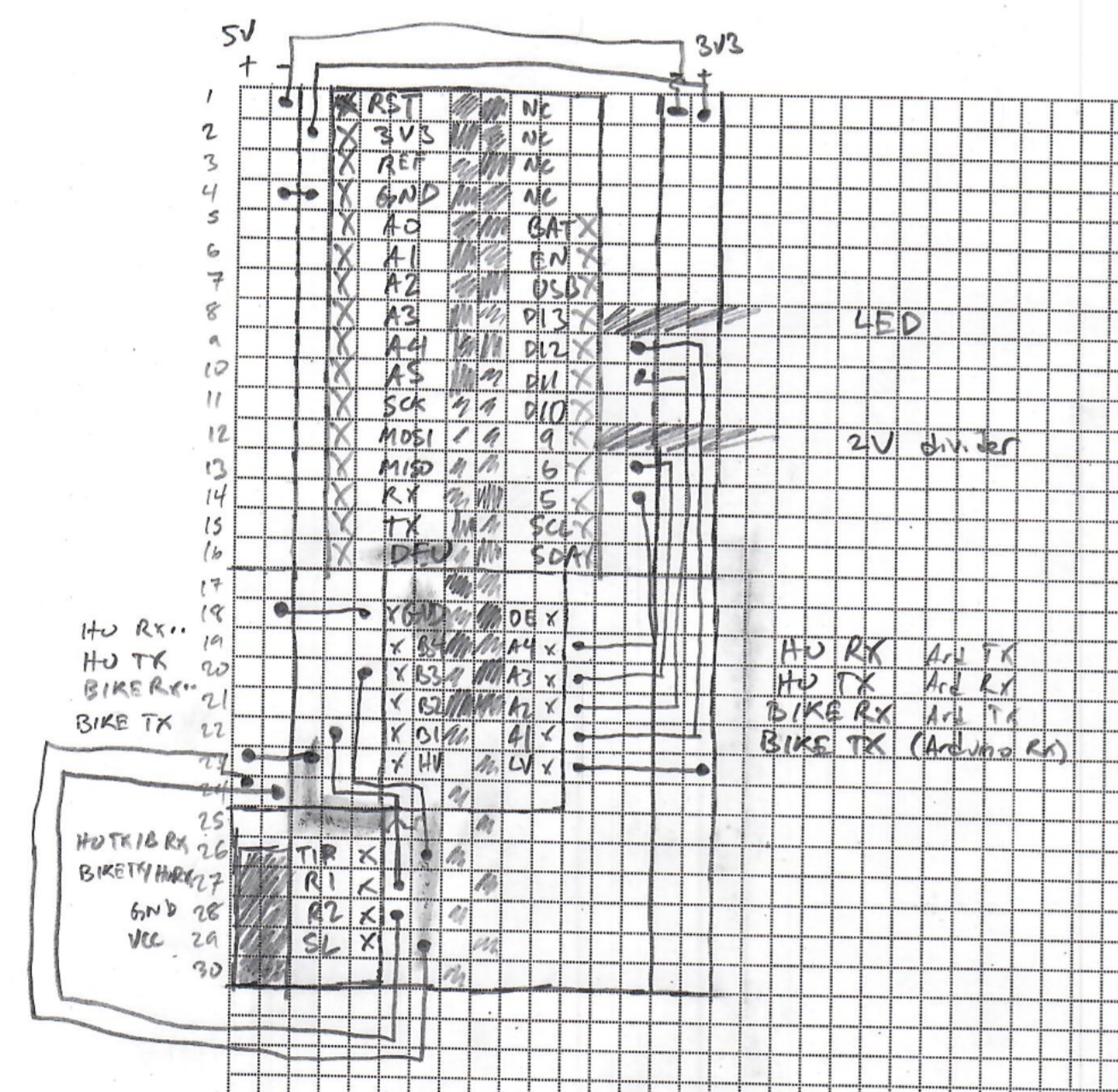 First paper layout for the PeloMon. In this drawing I was planning on using a different level shifter than the 74AHCT14N I landed on.

In the end, there were only a couple slightly tricky things about optimizing the layout from a breadboard perspective: 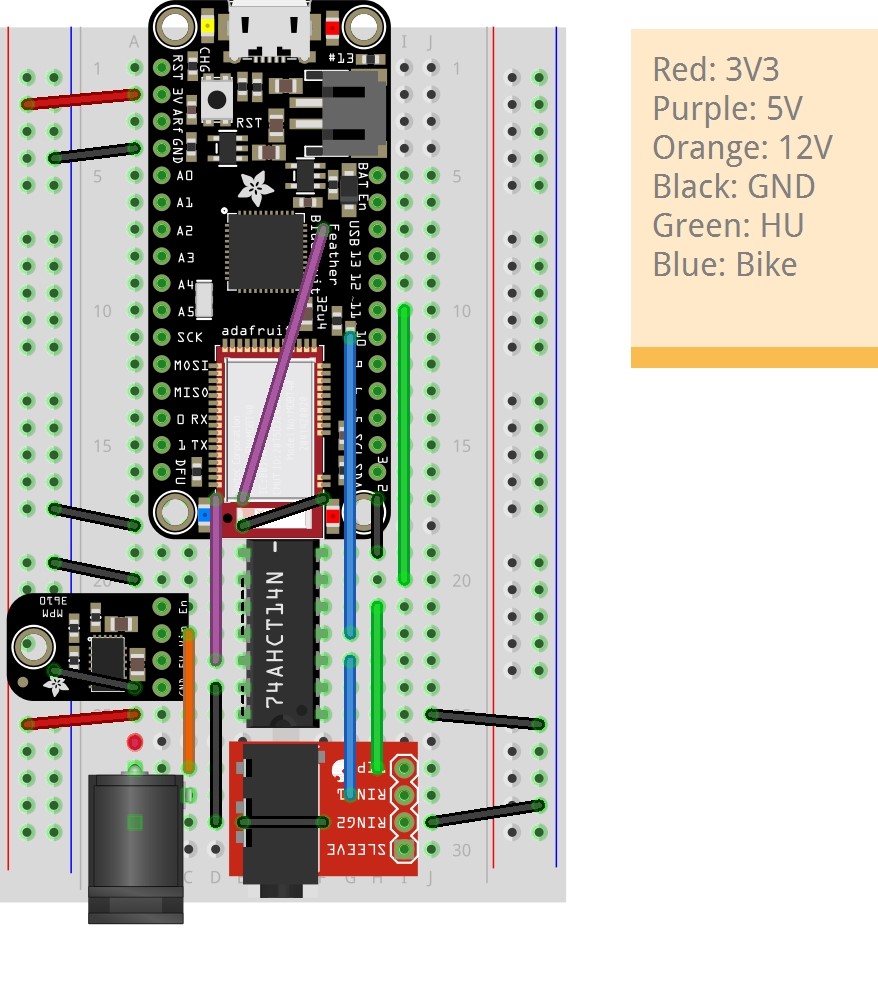 Final breadboard layout for the Pelomon

Fritzing files for the breadboard and perma-proto versions of the PeloMon are on the project GitHub. Note that the file for the perma-proto version looks like it’s on a normal breadboard if you load it into Fritzing — that’s because the actual perma-proto layer completely breaks Fritzing’s responsiveness. The coordinates of each piece are still correct.

Here are links to the hardware and tools involved in the project in case you’d like to follow along. I bought from a mix of Amazon and Adafruit; note that the Amazon links are affiliate links so if you end up buying there I’ll get a small referral bonus.